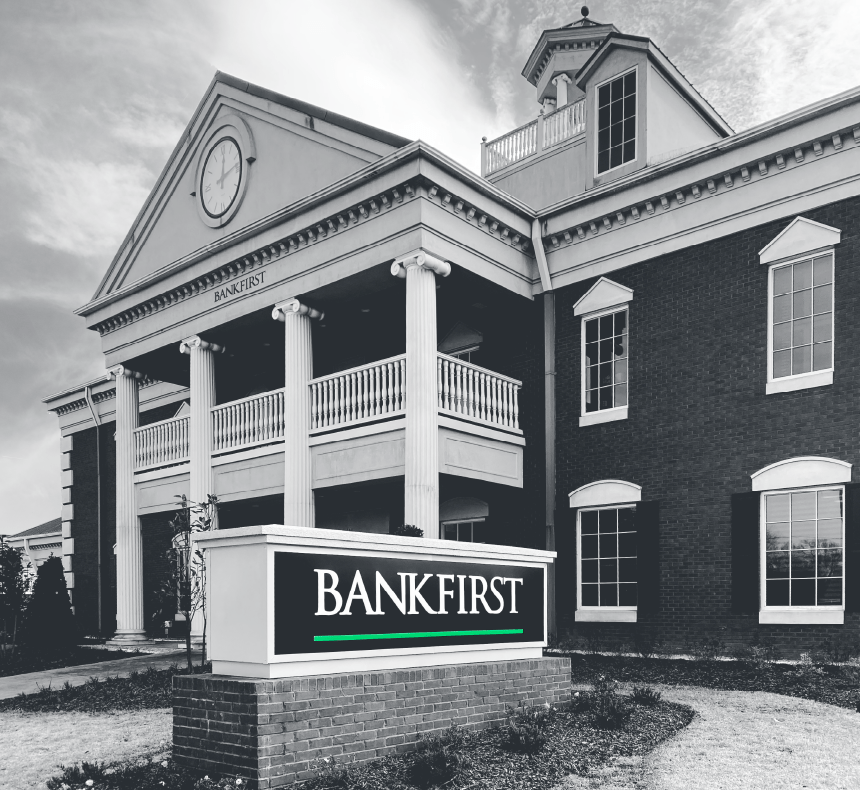 BankFirst is headquartered in Columbus, Mississippi with extensive corporate operations in Macon, Mississippi. Established in 1888 with one location, we currently operate more than 40 branch locations and multiple loan production offices in Mississippi and Alabama. We have been a Community Development Financial Institution (CDFI) since 2010. Our Board of Directors and management team continue to be committed to our vision of "becoming the dominant, community-focused, independent bank in the markets we serve."

BankFirst is the principal subsidiary of BankFirst Capital Corporation (OTC: BFCC). Founded in 1888, BankFirst is driven by strong values and a long-term, disciplined perspective that emphasizes our commitment to providing high-quality financial products and services as well as delivering exceptional customer service. We are passionate about supporting our communities through socially responsible leadership and cultivating a strong and positive corporate culture. Backed with a long history of strength and security, BankFirst continues to provide innovative products and services designed to meet customers’ needs, while helping communities to prosper and grow.

Accessible When and Where You Need Us

For ATM access, BankFirst is part of the MoneyPass® ATM networks, which provides our clients with surcharge-free withdrawals at over 32,000 ATM locations across the country.

Committed to Our Communities

We’ve made a commitment to managing our banks at the local level and believe it is one of the values that sets us apart. BankFirst operates community-oriented banks with their own local presidents and advisory boards. Serving our communities in this way allows our employees to be deeply involved, volunteering their time and donating resources to make the communities we call home better for all of us.

"The mission of BankFirst is to consistently meet and frequently exceed the expectations of:

OUR CUSTOMERS who expect competitively priced, high quality products and service from a knowledgeable, friendly, and responsive staff

OUR EMPLOYEES who expect an enjoyable and challenging work environment where they are driven by teamwork and then recognized and rewarded for performance on the merits of their individual accomplishments and the success of our bank."

We will conduct our business and achieve our mission in a manner that reflects our core values.

It is our belief with independence comes a competitive advantage that creates flexibility and recognition of market intangibles that help our company, its communities, its customers and its stakeholders thrive and grow.

We will be honest, reliable, and consistent as we strive to do the right things for our customers, shareholders, employees, and communities.

We will respect our communities, employees and company by understanding the perspective of others, recognizing their value, and treating people fairly.

We are committed to independently, and as a team, strive to meet and exceed expectations for each of our stakeholders every day.

We are collectively better as a team than as individuals and will work toward common goals by helping one another, recognizing that all of us can contribute and have a role, and respectfully offering ideas for change and improvement.

On June 1, 1888, Merchants and Farmers Bank, in Macon, MS, opened with $20,000 in capital. The first home of the bank was the law office of Judge H. W. Foote, the only building in town with a fireproof vault. During the depression in the 1930s, board members personally pledged high quality municipal bonds to insure the funds of our depositors. This action reassured the depositors, and no run was ever made on the bank.

The 1990s was a decade of great growth as the bank moved into the Golden Triangle. In 1994, the bank added three branches in Columbus, and then branched into West Point on a de novo basis in 1997. In 1999, the bank opened two de novo branches in Starkville. With the rapid expansion of the bank's service area, it was felt that the bank needed a new name — one that would better represent our ability to meet the financial needs of all the people within the communities we serve. For that reason, on July 12, 1999, Merchants & Farmers Bank became BankFirst. We believe the new BankFirst name expresses our desire to be a bank that places the needs of its customers first.

In 2002, BankFirst expanded its service area again by moving into the Greater Jackson area, adding branches in Madison, Flowood and Jackson.

In 2014, the bank further expanded into Tuscaloosa, Alabama, setting BankFirst up for growth in Tuscaloosa and the communities of the West Central region of Alabama.

In May of 2015, BankFirst acquired Newton County Bank, adding additional branches for a total of 18 in the BankFirst network, increasing the bank's total assets in excess of $875 million, and making BankFirst the 11th largest Mississippi-based banking institution, with branches in Flowood, Hickory, Jackson, Lake, Louin, Macon, Madison, Newton, Starkville and West Point, Mississippi, and Tuscaloosa, Alabama.

In March of 2018, BankFirst acquired Oxford, Mississippi-based HomeFirst, Inc., adding a mortgage team and office in Oxford, complementing and enhancing the bank's mortgage platform and expanding its footprint to the Oxford community.

In 2019, BankFirst opened a loan production office in Hattiesburg, Mississippi, and, on April 1, 2019, acquired FNB of Central Alabama, adding branches in Aliceville, Carrollton, Gordo and Northport, Alabama, expanding BankFirst’s footprint to 22 offices in Mississippi and Alabama, and increasing the bank’s assets to $1.3 billion, gross loans to approximately $904 million and total deposits to approximately $1.1 billion—making BankFirst the 9th largest Mississippi-based banking institution. In the same year, BankFirst Capital Corporation was first listed on the OTC:QX stock exchange with the symbol: BFCC.

On July 1, 2020, BankFirst acquired Traders & Farmers Bancshares, Inc. along with its nine Alabama locations in Haleyville, Addison, Arley, Bear Creek, Curry, Double Springs and Lynn, increasing the bank's total assets to approximately $1.8 billion and moving BankFirst from being the 9th largest Mississippi-based banking institution to being the 8th largest.

In 2021, BankFirst announced the opening of loan production offices in Oxford and Biloxi, Mississippi, further expanding the footprint to North Mississippi and the Mississippi Gulf Coast.

In the summer of 2022, BankFirst announced the opening of loan production offices in Birmingham, Alabama, and Tupelo, Mississippi; and the bank entered into a Definitive Agreement to acquire Senatobia-based Tate Financial Corporation and Sycamore Bank with its branch offices in Coldwater, Hernando, Independence, Oxford, Senatobia, and Southaven, Mississippi, increasing the bank’s assets to approximately $2.3 billion.

On September 1, 2022, it was announced that BankFirst Capital Corporation ("BankFirst") agreed to acquire Water Valley based Mechanics Banc Holding Company (Mechanics) along with its five Mechanics Bank branch locations in Oxford and Water Valley, Mississippi.

On October 1, 2022, BankFirst finalized the acquisition of Sycamore Bank, increasing the bank's assets to approximately $2.5 billion and bringing the bank's total number of offices to 38.

At the beginning of 2023, BankFirst and Mechanics Bank finalized their merger, increasing the bank's assets to approximately $2.7 billion with 47 offices across Alabama and Mississippi.